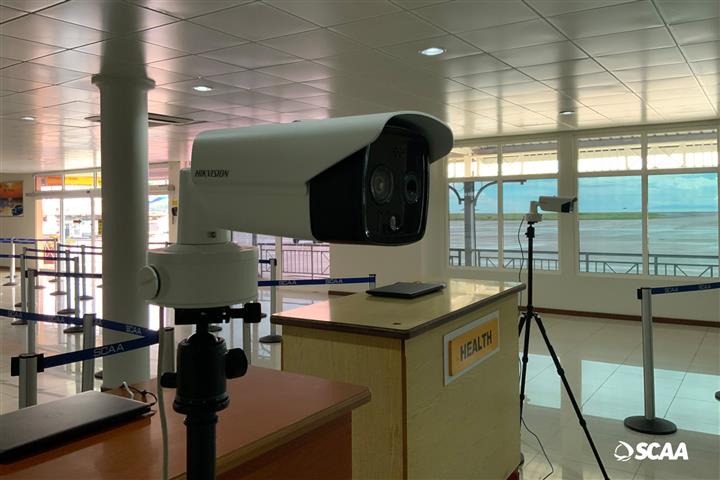 New higher efficiency thermal cameras are being installed and tested at the Seychelles International Airport, as the facility prepares to resume commercial operations in June.

Those new Hikvision fixed bullet cameras take only one second to detect temperature in one person, and this can be done from one meter away, hence making it highly efficient for places with long queues such as at the airport. Four of this much-needed equipment have been purchased by the Seychelles Civil Aviation Authority to replace the ones which were being used until recently to screen incoming passengers.

The authority’s Chief Executive Officer Mr Garry Albert said that the purchase of such vital equipment is part of the airport’s strategy in line with the public health guidelines to maintain high alert at all times during the Covid-19 pandemic, and it is one of several public health measures recommended by the Centres for Disease Control and Prevention, avid the COVID-19 pandemic, which will add an extra layer of protection for passengers, airline and airport employees.

“Remaining vigilant at the most popular and critical gateway in our country has always been vital, as we cannot compromise the safety of the travelling public, and the health of our nation. Previously, two thermal cameras have been operational at our airport since 2014, when there was an Ebola outbreak in West Africa. Now with COVID-19, the SCAA has deemed it necessary to acquire more modern ones in terms of efficiency and performance, which will be highly useful in passenger screening” he said.

Mr Albert added that this development aligns with measures that are being put in place at various international airports globally, in ensuring the health and safety of passengers particularly in view that COVID-19 is expected to have an impact on commercial air transport for 2-3 years according to the International Air Transport Association.

SCAA’s ICT personnel is undertaking the project which include calibrating the equipment and installing them as well as provide the necessary training to the public health officers working at the airport, who will be operating them. SCAA will also provide any other technical support once they are in use.

Hikvision; the manufacturer, is a Chinese based company which has been ranked as one of the top brands in the security and surveillance industry. Their products are currently being used by SCAA for VSS cameras and access control. The company has expanded the production into thermal camera for fever screening and with recent development they have been known to provide the latest technology in this industry.

The equipment with its associated accessories has cost the SCAA SCR310,520. They will not only be useful for this crisis but also for any other epidemic that requires strict border access control and surveillance.

About SCAA
The Seychelles Civil Aviation Authority (SCAA) was established under the Seychelles Civil Aviation Authority Act ,2005, as an administrative and financial body corporate to provide for the services, facilities and regulation of civil aviation activities in Seychelles, consistent and in accordance with national and international standards. For more information, please visit: www.scaa.sc